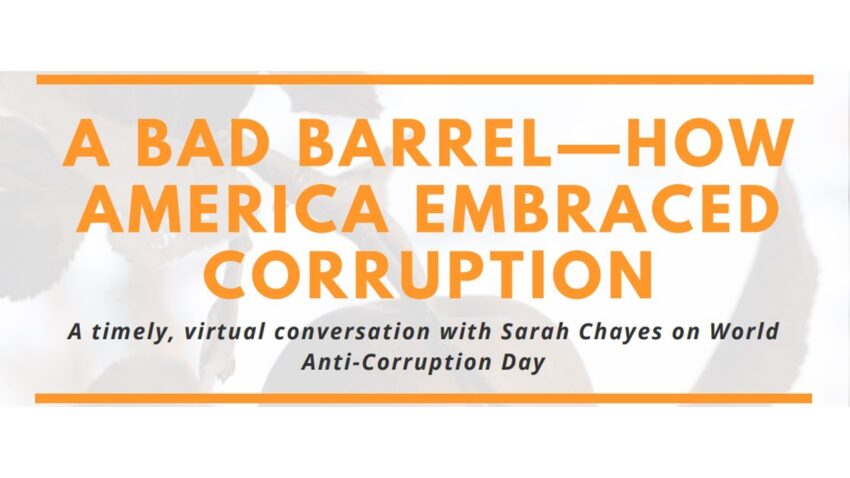 Corruption has burst onto the world stage as a driver of crises – including violent extremism, mass migration, civic insurrections or even revolutions that have spiraled into devastating civil wars, and irreparable ecological damage. But the type of systemic corruption at work in those cases is seen by most Westerners as existing only “over there.” Americans – or at least American elites – balk at even using the word corruption to describe their own country. Instead, corrupt practices in the U.S. are widely assumed to be isolated exceptions to a norm of integrity in government.

After a dramatic 2016 election in which corruption became a campaign slogan across the political spectrum, and four tumultuous years of broken ethics norms, is it possible to maintain this is still the case? Is corruption in the US truly limited to the acts of isolated ‘bad apples’? Or is it time to recognize that corruption has become the system shaping the American political economy?

Sarah Chayes, an internationally recognised expert on corruption (and author of Thieves of State: Why Corruption Threatens Global Security) will take up this question in a free, live, webinar hosted by The Fletcher School’s Corruption, Justice and Legitimacy Program and Jonathan M. Tisch College for Civic Life on World Anti-Corruption Day (Dec 9). Drawing on her years of work in a dozen developing countries and her new book On Corruption in America: and What Is at Stake, Sarah will argue that America is now in the grip of systemic corruption, that networks of wealth-maximizers, weaving across public and private sectors, have rigged the system. She will sketch the likely dramatic consequences of this state of affairs, and collective and individual responses available to all of us to ward them off.